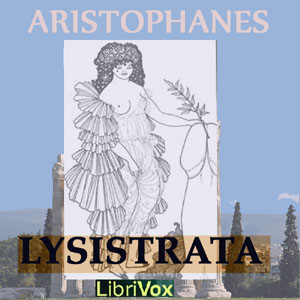 LibriVox recording of Arisophanes, by Lysistrata. Read by a group of college students First performed in classical Athens c. 411 B.C.E., Aristophanes’ “Lysistrata” is the original battle of the sexes. One woman, Lysistrata, brings together the women of all Greece, exhorting them to withhold sexual contact from all men in order that they negotiate a treaty. Double entendres abound as men of Greece attempt to keep Lysistrata and her prurient gang from putting an end to the Peloponnesian war. Notably risqué, this comic drama sheds light on gender relations in ancient Athens
Translator is not named, but Jack Lindsay is commentator and Norman Lindsay is the illustrator. For further information, including links to online text, reader information, RSS feeds, CD cover or other formats (if available), please go to the LibriVox catalog page for this recording. For more free audio books or to become a volunteer reader, visit LibriVox.org. Download M4B (36MB)

Uploaded by librivoxbooks on December 27, 2010